Skip to content
February 8, 2011 ~ macengr ~ 8 Comments
In a previous post, I noted that I was exploring the notion of whether or not the language you speak can influence the way you think.  For example, our concept of justice may be completely different from what someone who speaks a different language uses their equivalent of the word to refer to.  Currently, most linguists will tell you that there is no difference, and that all languages are the same.
Guy Deutscher disagrees.  In some ways, he sets out to prove, culture CAN make a difference in the way we see the world.

In Part I of Through the Language Glass: Why the World Looks Different in Other Languages, Deutscher notes that in both Homer’s Iliad and Odyssey as well as Old testament Hebrew, there is no use of the color blue to describe things.  For example the sea (blue) is referred to as wine colored (red!).  In the Bible, heifers (brown) are referred to as red.  Theory once held that their eyes hadn’t evolved the ability to see those colors, but this was proven false when the same type of thing turned up in modern tribal langauges.  These languages – speakers of which are still alive – often refer to things as black, white, and maybe red, but not green or blue.  Brightness of the color seems to indicate which bucket it goes in.  Yet their eyes are identical to ours!  Further tests showed that they easily distinguish that blue and green are different – they can see the colors.  So the reason is cultural, not physical; i.e., it’s nurture, not nature.
In Part II, the author notes that although not all languages express all ideas, they are capable of expressing any idea and the speakers are able to comprehend them.  He then states his main point:
“The real effects of the mother tongue are rather the habits that develop through the frequent use of certain ways of expression.”
He gives three examples (I’m seriously oversimplifying these; read the book for more):
1) Spatial coordinates and orientation and memory:  Certain groups, rather than saying turn left or right, use north, east, etc all the time.  They are much better at knowing which way is north than someone who doesn’t.  It also affects the way they remember an event since they can’t say they jumped back, they jumped south.
2) Gender – In English, gender is gone from most of our words.  But in German and other world languages, each noun is either masculine, feminine and neuter.  And lest you think that’s simple, remember that most words for females in German are neuter, but many inanimate objects are feminine!
3) Color – as above, but also note that even the definition of each color can vary – for example, in Japan, green goes further into the blue area than in the United States.
There is much more in the book including how these examples can affect thought patterns.  Deutscher also notes that research is really just beginning on this area and that one of the major roadblocks right now is our lack of understanding of the brain works.  How language processing and thought take place is pretty much a black box.
This will be an interesting area to keep an eye on in the future! In related news, I have The Geography of Thought by Richard Nisbett in my antilibrary, so keep an eye out for that review coming up…
February 1, 2011 ~ macengr ~ 2 Comments

A piece in Foreign Policy Magazine this month made me think. Quote first:

THE UNITED STATES OF AMNESIA
Last but not least, discredited ideas sometimes come back to life because societies simply forget important lessons about the past. Political psychologists generally agree that personal experiences have a disproportionate impact on our political beliefs, and lessons learned by older generations rarely resonate as strongly with their successors. And besides, as the years go by it becomes easier to argue that circumstances have changed and that “things are different now,” encouraging the wrong-headed view that previous wisdoms about how to deal with particular problems might no longer hold. Of course, sometimes those arguments will be correct — there are few timeless verities in political life — and even seemingly unassailable truths might someday be seriously challenged if not discredited. All this just further complicates the problem of learning and retaining the right lessons from the past.
(Me again) It’s all fine and dandy to talk about learning from the past, and we all know the Santayana quote about being condemned to repeat it if we don’t. Still, I wonder if we truly try.

I read a lot of books. What I’ve noticed is that many people…don’t read at all. On the internet is an exception, and I think a lot of bloggers forget that since many of them read. Most of the bosses I’ve had didn’t, even if they were CEOs. They say that you can’t learn anything out of a book. I disagree with this, and my example is simply that I wouldn’t trust a doctor who had never cracked open an introductory anatomy text. There’s no substitute for experience, yes…but background knowledge can indeed be gained from books.

Over the last few months, as I’ve been working in the field of international security, I’ve had occasion to think about this as applied to the United States armed forces. I’ve read David Kilcullen’s Accidental Guerillas. And lately, I’ve read these two books (both good descriptions of small unit tactics in counterinsurgency): 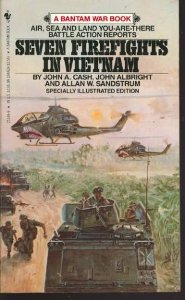 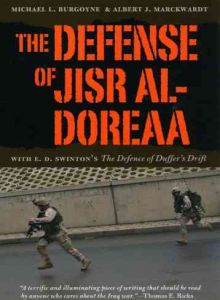 The Defense of Jisr Al-Doreaa by Michael Burgoyne and Albert J. Marckwardt with E.D. Swinton’s Defense of Duffer’s Drift

The question is, how many of our United States soldiers have? How many have been exposed to these ideas? Yes, we have a whole Field Manual dedicated to counterinsurgency, but have you ever actually tried to read an army field manual? We have a well trained, professional force. So we say. But I think the army would do well to either encourage it’s troopers to read these books, or else present the main ideas in classes – before they ship out to fight a counterinsurgency.

The average guy doesn’t read history. He reads sports. Right now, the big news in Pittsburgh is the fact that we’re in the Super Bowl (Go Steelers!). Most guys I know (Yes, I know that the plural of anecdote is NOT statistics) can quote Polamalu’s stats from memory, but would be hard pressed to tell you who Hosni Mubarak is. Or what happened at My Lai. Or who Thucydides is.

So how are we supposed to learn from history? Maybe it can’t tell us what the right thing to do is or help to predict the future (See Nassim Taleb’s books) but I think it can help us to keep from repeating the same mistakes. What are your thoughts? Do we need a stronger curriculum for schools? If not, or if that’s not possible, what do you suggest?