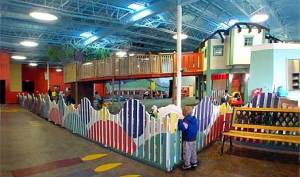 I’m not one for writing on politics, and I rarely rant on anything.  I’m also taking my life in my hands to criticize the Pittsburgh Penguins, who just smashed the Ottawa Senators and may be on their way to another Stanley Cup.  (Note:  Go Pens!)

But I had to get this one off my chest.  I have a four and a half year old boy.  He’s my greatest treasure.  And this one’s for him.  Note:  He’s a Pens fan too!

Back at the end of March, the Children’s Center for Creative Play in Edgewood closed down.  My son has been there numerous times and enjoyed himself.  It was a place where there was lots to do and where he could, dare I say it, exercise his creativity.  In this day an age, especially with globalization, creativity is a pretty important thing.  Just read A Whole New Mind by Dan Pink.

Anyway, the Center closed due to lack of funding.  So let me get this straight:  we can build not one, not two, but THREE sports arenas for millionaire athletes playing CHILDREN’s games, but we can’t take care of our own children?  Where are the priorities in this city?  Mr. Ravenstahl, are you not supposed to be a fresh new face doing things different?  No, you’re just like your predecessors pandering to the big money donors and ignoring the little people.  Wouldn’t creative, well-educated kids make a bigger difference in our ACT 47 city than a new hockey arena, a casino, and so on?

I encourage everyone to fight for the Center for Creative Play – there’s a group trying to save it at THIS WEBSITE.

What do you think?  Is it worth saving?

View all posts by macengr

One thought on “Misplaced Priorities”